The Berlin Kebab Guide: Turkish food in Berlin is immense. Here is a guide on the best kebabs Berlin had to offer me

I spent 2 wonderful months living in Berlin in the summer of 2011. The first impression of Berlin is rawness – a concrete jungle in many parts. It is not quite the gleaming capital you might expect. Beyond the central area “Mitte”, many parts of Berlin have a boom and bust tale. Some parts in the East haven’t improved too much since the fall of the wall, while some parts of the West lost its glamour after the fall of the wall. The reunification resulted in Berlin paying a price – with the civil servants on both side of the wall suffering the most. Berlin today is recovering from the headache in the 90s. It is recognised as one of the great internet start-up hubs in Europe – home to the likes of Rocket Internet who incubated Groupon and Ebay clones in Europe. While unemployment still stands high around 13%+, there is a fledgling scene of music, art and culture – driven by a large left wing population. Every night there is a new art opening, a club opening here and there. It is a welcoming and unpretentious city. Members of my language class were turned down from visiting some clubs for being too smartly dressed, looking on in confusion as bearded and scruffy men take their places (poor but sexy was the motto).

Germans love their kebabs, even in the conservative Bavaria area. The kebab capital is Berlin. It would be unfair to recommend a trip to Berlin without tasting Kebabs. Legend has it the Doner kebab was invented here by Turkish immigrants. Doner kebabs have been much abused outside Germany. In England, it is the food of choice for wasted revellers late at night and synonymously linked with morning after Diarrhoea. In France, the kebabs were not too much better either. The Doner kebab is supposed to be a rotating spit of pressed marinated meat. Low quality Doners use cheap quality meat and skin, minced and binded with filler (see pic on below right ). Go to Berlin however, and you can glimpse the Doner in its original beauty (in a wrap, see pic on below left). The most popular Doner kebabs you will see are Chicken and Beef (also called Huhn or Rind Schwarama locally), although you may be lucky to taste Veal or Lamb too. The Doner kebab can be served either in a durum wheat wrap (“Durum” as the locals would say) or a round bread bap, along with sliced cabbage, tomatoes & other salad vegetables, and sauces such as chilli and yoghurt.


What’s great about a Doner kebab?
So let me start by stating my preconception of kebabs prior to moving to Berlin: the English offering was shaved, salty pieces of undistinguishable meat strips served with chips and drowned with chili sauce. It wasn’t a meal which had me coming back for more. When my girlfriend Nena, who grew up in Germany, spoke of her loving and excitement to be have a kebab in Germany again after a long absence, I was somewhat horrified (especially if this was to be a regular experience). Nevertheless, I promised to be open minded (although a voice in the back of my head gave frequent warning bells) and allowed my first meal in Berlin to be a kebab. Nena and her sister Kika took us to the Rosenthaler, our local Turkish café for my first experience, of a chicken Schwarama in a Durum wrap. It was so fucking good that I had to order a second one straightaway.

A good Doner kebab sandwich should have a good mixture between the meat and the other fillings – your sandwich will be heaving with fillings, but less than half of that will typically be the Doner meat. I like the Durum wrap because the wrap reminds me of pancake for Beijing Duck, and you don’t get a mouthful of bread to distract you from the delicious fillings. The crunchy cabbage gives a good contrast to the tender meat. The actual flavour from the kebab meat should not be overpowering – the flavour should come from the sauce such as chilli. Without sauce, the sandwich can be a bit dry, so make sure you ask for lots of sauce.  Don’t expect plates or cutlery if you order the sandwich version– it is best eaten with hands!

In the two months that I spent in Berlin, I ended up having kebabs nearly every other day for lunch. The impact on health is actually not as bad as you think vs a burger/pizza meal, while there is also a considerable amount of fresh vegetables in a Doner sandwich.

What to Pay
As a rough guide, a Doner sandwich/durum wrap from a hole in the wall will sell from EUR 3 upwards. In general, I haven’t been desperate enough to eat from a hole in the wall, because there are usually sit down places that are open even in the small hours. A Doner sandwich/durum wrap from a Kebab house with sit down areas will be from about EUR 4 upwards. When ordering a plate of the good stuff (Doner Teller), you can be expected to pay around EUR 9 upwards. The bread element is replaced with rice, and you are served an assortment of salad and pickles.

How do I tell a good Doner kebab from bad?
There are numerous kebab houses and shacks in Berlin – how do you determine the quality and ensure you are having a good one? Here are some of my tips:
1.       Look for Turkish customers consuming. They know quality!
2.       Look at the quality of the meat. For chicken, you should definitely be able to make out the stack of different strips of chicken meat. It is a bit tricker when it comes to beef –on a good Doner you should be able to make out the different stacks. I generally avoid anything that looks too uniform in texture.
3.       Look for the moistness. There should be some juice oozing from the kebab. Looking dry and miserable? It has perhaps sat there a bit long.
4.       Try and ask for the kebab fresh off the spit, not from the heated container (when customer flow is low, they would shave off the outer layer and keep it warm, to prevent the outer layer from being too dry)
5.       Let your nose and eyes guide you. You should smell good seasoning (mixture of cumin and other spices). If it smells bland, looks grey then it is probably a low quality doner.
6.       Look for an appetising selection of fillings to go with the kebab – fresh chopped salad items, lots of sauces etc.


Here’s my shortlist of Kebab houses / Turkish restaurants in Berlin

<<<Top places>>>
Hasir (http://www.hasir.de/eng/index.html): This is the legendary birthplace of the Doner Sandwich. Now expanded into a 6 restaurant strong chain, with a sizeable menu. The focus has somewhat moved away from just Kebabs, to providing an authentic Turkish experience – the grilled meat and meatball main dishes are excellent (especially the lamb dishes), and there’s a wide range of appetising mezzes. At the original Kreuzberg restaurant, a takeaway section still remains. Hasir is highly recommended for introducing your friends and family to Turkish food, but if you are adventurous and seeking a pure Doner experience…try the others listed below.
The original and flagship Hasir restaurant is in Kreuzberg: Adalbertstr.10, 10999 Berlin. Nearest U-bahn: Kotbusser Tor

Maroush (http://www.maroush-berlin.de): Just across the road from the original Hasir is Maroush. More Lebanese than Turkish, we like Maroush for its twist on the Doner: it puts potato fries as well as fried vegetable into the Doner sandwich (in a Pita bread). Maroush also does nice falafels. The size of the place is small, with only 5-6 tables, but there’s a nice nearby open air cinema (in the summer) and park for you to take your feast to, if you make it that far. 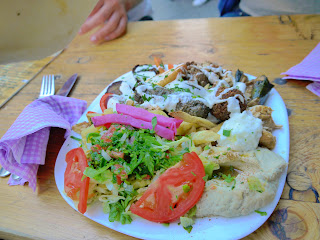 Tekbir Doner (Veal): It’s great to see some variations to the kebab, and Tekbir does amazingly well with its signature Veal Doner. From the outside, Tekbir looks like cheap and non-descript, with two weathered benches on the outside. A taste of the delicious veal meat makes up for this – with its rich aroma, and copious amount of complimenting sauce.
Tekbir: Skalitzer Straße 23, 10999 Berlin. Nearest U-bahn: Kotbusser Tor

Rosenthaler: Special mention to our local favourite kebab house. The Rosenthaler sits at a busy junction and was where I had my first chicken schwarama. They do a great Durum wrap – moist chicken meat, tasty salad and great selection of condiments. Simple, effective and keeps me coming back for more. They also have a brick oven, where they make their own Pide before your eyes – a sort of semi open pizza.
Rosenthaler Grill und Schlemmerbuffet: Brunnenstrasse 2, Rosenthaler Platz, Berlin. Nearest U-bahn: Rosenthaler Platz

Gel Gor: I never got the chance to visit this, but this is highly rated – with Kofte meatball sandwiches as the house special.
Gel Gor: Kottbusser Damm 80, Neukölln/Kreuzberg. Nearest U-Bahn: Schoneleinstrasse

<<<<Other places to mention:>>>>
Tandir: Out in the sticks in Hermannstrasse/Neukoln district, there’s not really much reason to visit this Turkish area, unless you want some cultural experience. Among the several kebab houses in the area, Tandir stands out. The Doner wrap here is filled with pickled vegetables, chillis and they also use a distinctive dill yogurt sauce. The top picks here are the kofte meatballs / lamb chops, done wonderfully over the charcoal grill. There are Turkish bakeries close by, where you can pick up fresh sesame bread, Pide and sweets such as Baklava.
Tandir: Hermannstraße 157, 12049 Berlin. Nearest U-bahn: Hermannstrasse

Ali Baba: According to locals, Ali Baba once did great kebabs but has now dropped down in quality slightly. With it being only a stones throw away from my language school, I did get to visit Ali Baba a few times for a Doner lunch. Disappointingly, it felt somewhat average but good for a fix if you are in the Prenzlauerberg area (such as to visit Mauer Park or try the famous currywurst shack nearby).
Ali Baba: Danziger Strasse 2, 10435 Berlin. Nearest U-bahn: Eberswalder Strasse

Baghdad: A huge menu to explore here, and reasonably good durum wrap at sensible prices. It has a large seating area which makes it an ideal choice for large group gatherings. It is also close to the river – grab a few beers from the drinks fridge and take your food down to the river bank on a nice day.
Baghdad: Schlesische Straße 2, 10997 Berlin. Nearest U-bahn: Schlesisches Tor

I can’t claim that this is a definite guide to the Berlin kebab scene. I have only been to a fraction of the thousand odd kebab places in Berlin: There’s a kebab shop on almost every street corner in Berlin, so there’s lots to explore, and their appeal just keeps spreading. Go and see for yourself. And you might never want to eat a kebab outside of Germany again.